The 2020 election is shaping up to be the ugliest in modern history, with the candidates and their surrogates eschewing many of the formerly-accepted tenets of political decency in their quest for victory.

There are very real consequences to this sort of naked vitriol, and we’ve seen the effects of this political prejudice play out on the streets of our nation, in cities like Portland and Seattle.

Now, fueled by the turbo-hyperbole of the mainstream media, the campaigns are turning to the absurd and offensive themselves.

The video, released by the Biden/Harris campaign on Oct. 25, combines Biden’s stump speech about the Charlottesville riots in August 2017 with the song “Where Is the Love” by the Black Eyed Peas, also featuring vocalist Jennifer Hudson.

The effort appears to be an attempt to re-create will.i.am’s 2008 video, “Yes We Can,” which set a speech by then-Sen. Barack Obama (D-IL) to music.

Though the speech was delivered after Obama suffered a surprise loss in the New Hampshire primary, it had an electrifying effect on his campaign, inspiring activists to continue the fight.

One sequence in the video features archival footage of Adolf Hitler saluting a crowd in Nazi Germany. The crowd returns the infamous, chilling salute. 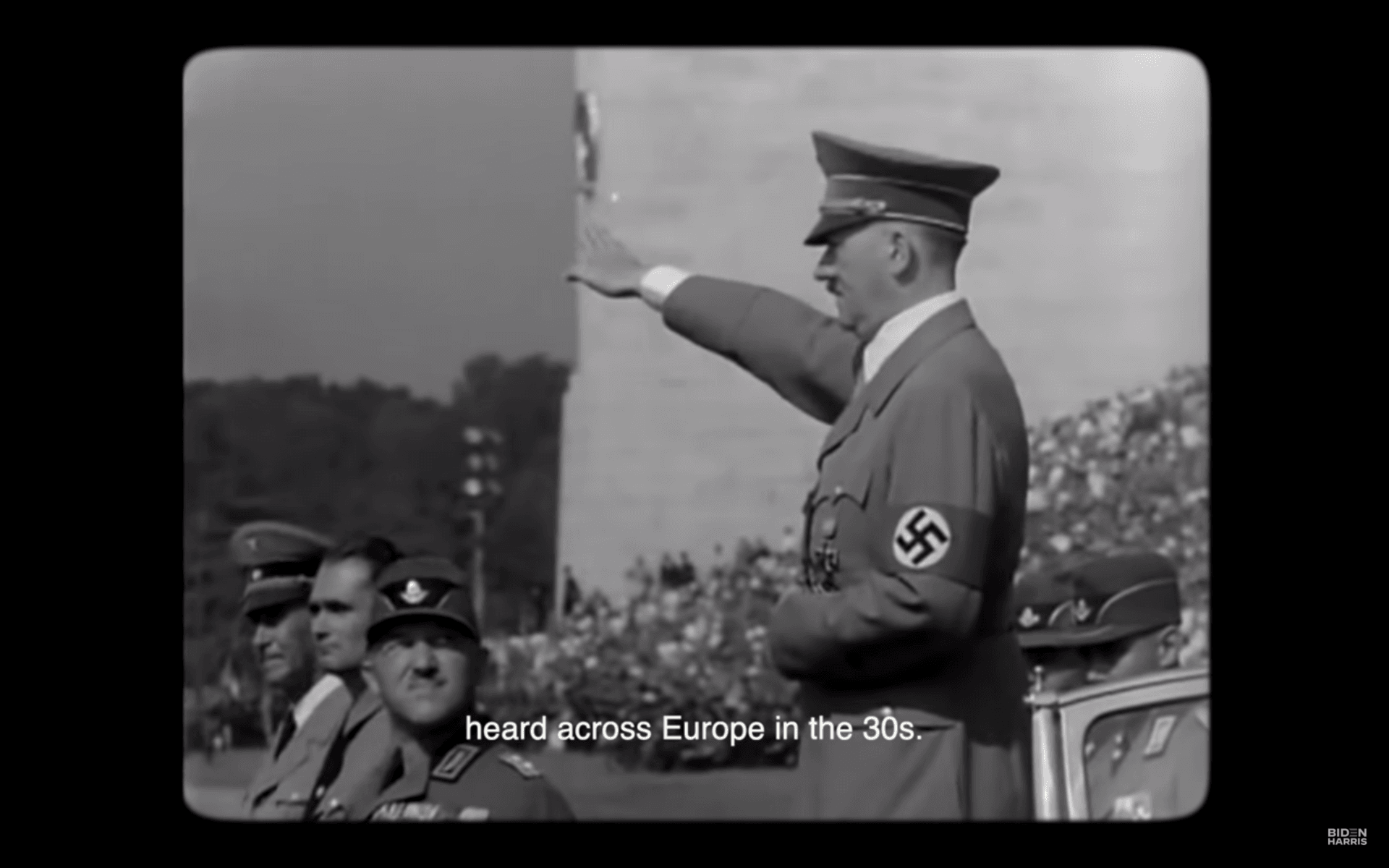 The use of Hitler and Nazi imagery has long been taboo in political advertising, with the Jewish Anti-Defamation League insisting that the Holocaust and the Nazi Party are to remain in different echelon of history, where their deeds cannot be dulled by comparison to contemporary figures and events.

In this article:2020 election, Adolf hitler, Featured, Joe Biden, nazi
Up Next:

Major MAGA Parade Planned for Highways Around the Nation This Weekend

Greatest Power in the World? NOT if Biden Has His Way!
The Black Sphere

Will Biden Say The Word “Fentanyl” During His State Of The Union Address?
February 7th, 2023 Sons of Liberty Media

Thailand to become first country in the world to declare its Pfizer contracts null and void
February 7th, 2023 DC Clothesline

No Sheep In My Circle Unisex T-Shirt

BOMBSHELL: Rep. Speculates that DOD Kept Trump in the Dark on China Spying