It is fair to say that America is in turmoil.

We have a nation that is divided today in ways that it hasn’t been for over 150 years.  We are politically polarized to the point in which nothing but the extremism of the left and the right can pierce the fog of our cultural centrism.

Make no mistake about it, this is all fueled by the mainstream media and their commitment to a long-corrupt system of sensationalizing real life in order to make you feel some way.  Your emotional reaction is just cash in the bank, as you find yourself engaged and, by no accident, watching more and more commercials.  To compete with one another in this sick game, each network is louder and more extreme than the last, pushing our society into an ever accelerating whirlwind of anger, fear, and distrust.

CNN and others are laughing all the way to the bank, while you’re contemplating just how you’re going to make it through another Thanksgiving dinner with your family’s diversity of opinion.

And, thrown into the midst of this political turmoil that is already amplified by the coming election, we have unprecedented healthcare costs and the very real possibility that we will soon be dealign with impeachment proceedings.

No wonder Americans are so stressed.

Even as their economy roared, more Americans were stressed, angry and worried last year than they have been at most points during the past decade. Asked about their feelings the previous day, the majority of Americans (55%) in 2018 said they had experienced stress during a lot of the day, nearly half (45%) said they felt worried a lot and more than one in five (22%) said they felt anger a lot. 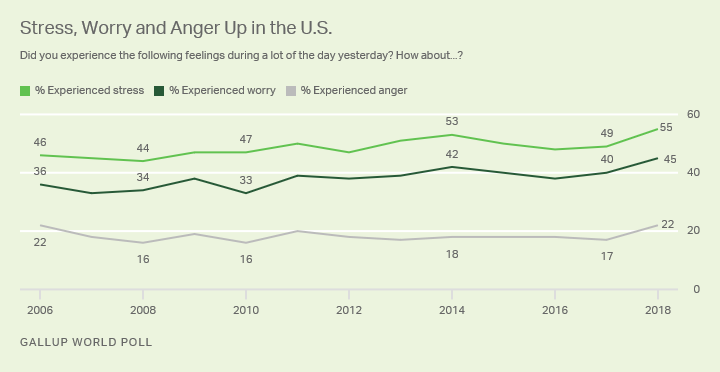 Each of these figures matches or tops previous highs in the U.S. Additionally, Gallup’s latest annual update on the world’s emotional state shows Americans were more likely to be stressed and worried than much of the world. In fact, the 55% of Americans who experienced stress was one of the highest rates out of the 143 countries studied and it beat the global average (35%) by a full 20 percentage points. The U.S. even ties statistically with Greece, which has led the world on this measure every year since 2012.

The world took a negative turn in 2017, with global levels of stress, worry, sadness and pain hitting new highs. During a solid year of economic growth, the U.S. kept this negative trend going into 2018. Higher levels of stress, anger and worry nudged Americans’ overall Negative Experience Index to 35 — three points higher than any previous score to date.

If there is a more apt piece of evidence for being a little kinder to one another in 2019, I couldn’t tell you what it would be.

In this article:america, Featured, poll, stress
Up Next:

North Korea Did The Unthinkable After Otto Warmbier’s Death

EXCLUSIVE! The Stories The Mainstream Media Is Hiding
The Lid

Hidden on Page 403 of Infrastructure Law Is a Mandate for a Government Backdoor ‘Kill Switch’ for Cars
January 20th, 2022 Flag And Cross

Not The Onion: TSA Accepts Arrest Warrants As Proof Of ID For Illegal Aliens Boarding US Flights
January 22nd, 2022 Sons of Liberty Media