On Saturday, completely out of the blue, Supreme Court Justice Brett Kavanaugh was hit with another accusation of sexual harassment.

You’d think the left would’ve moved on by now after already doing their best to ruin this man’s life.

Not by a long shot.

Supreme Court Justice Brett Kavanaugh was hit with another accusation of unwanted sexual contact by a male classmate who said he witnessed Kavanaugh expose himself and press his genitals against a woman without her consent.

The New York Times reported Saturday that the latest allegation, which has until now not been public, was reported to the FBI during Kavanaugh’s Supreme Court confirmation process last year but was not investigated by the FBI.

In the Times report, two FBI officials told the newspaper that a Yale classmate of Kavanaugh’s, D.C.-based nonprofit owner Max Stier, said that he had witnessed Kavanaugh expose himself at a party before other students pushed Kavanaugh’s genitals into the hand of a female student, apparently without her consent.

Senate Democrats posted a poll on Twitter asking Americans if they want more Kavanaugh’s or Ruth Bader Ginsburg’s on the Supreme Court.

What happened next is the stuff of legend.

In fact, DSCC actually deleted the tweet after the numbers skewed so heavily in Kavanaugh’s favor. 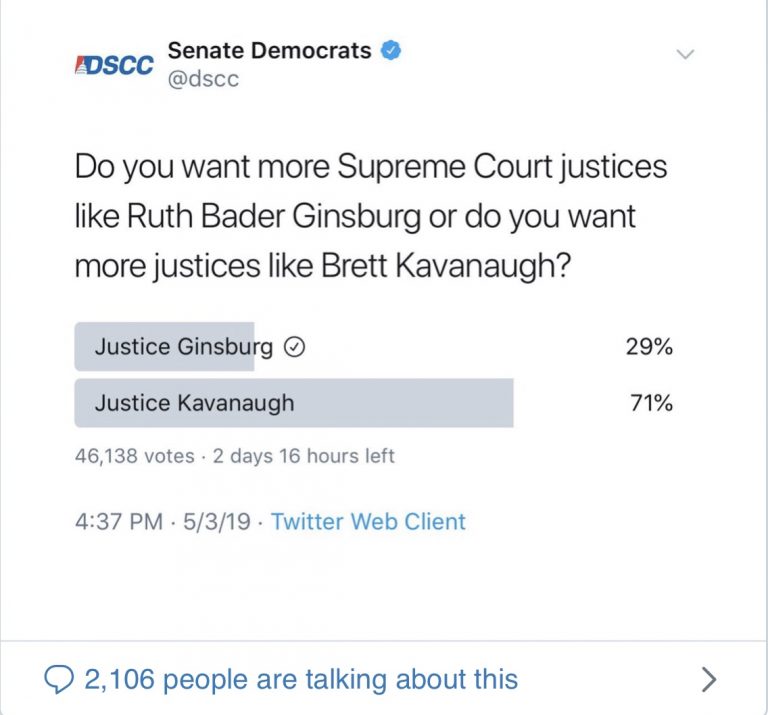 3. The @dscc has deleted this tweet after the results didn’t end up in their favor.

3. The @dscc has deleted this tweet after the results didn’t end up in their favor. pic.twitter.com/hb7IDdLMDi

HAHAHAHA! 71-29 in favor of the winner, “Justice Kavanaugh.”

Don Lemon has Off-Air Altercation with Kaitlan Collins, Known for her Homophobic Slurs