The democratic civil war is heating up once again, this time in The Heartland of our great nation.

With 20-some democrats still vying for the Oval Office come November of 2020, the race for the presidency has been reduced to little more than a circus sideshow.  The comparison became eerily prescient this week in particular as a number of democrats visited the Iowa State Fair to spread their message.  Among the corn dogs, ferris wheels, and baby-kissing moments, a tectonic shift within the race itself has former Vice President Joe Biden on shaky ground, however.

Elizabeth Warren’s early investment in Iowa is paying off.

A new Iowa Starting Line-Change Research poll shows the senator opening up a commanding lead in the Iowa Caucus. Warren was the top pick of 28% of likely Iowa Caucus-goers in the poll, an 11-point lead over the nearest competitor. Joe Biden and Bernie Sanders were both tied for second with 17% each. Pete Buttigieg came in fourth at 13% and Kamala Harris has the backing of 8%.

Both Cory Booker and Beto O’Rourke garnered 3% of caucus-goers’ support, while Steve Bullock, Tulsi Gabbard, Amy Klobuchar and Tom Steyer got on the board at 2%. Julian Castro, Michael Bennet and Andrew Yang rounded out the field at 1%, while everyone else had less than that. 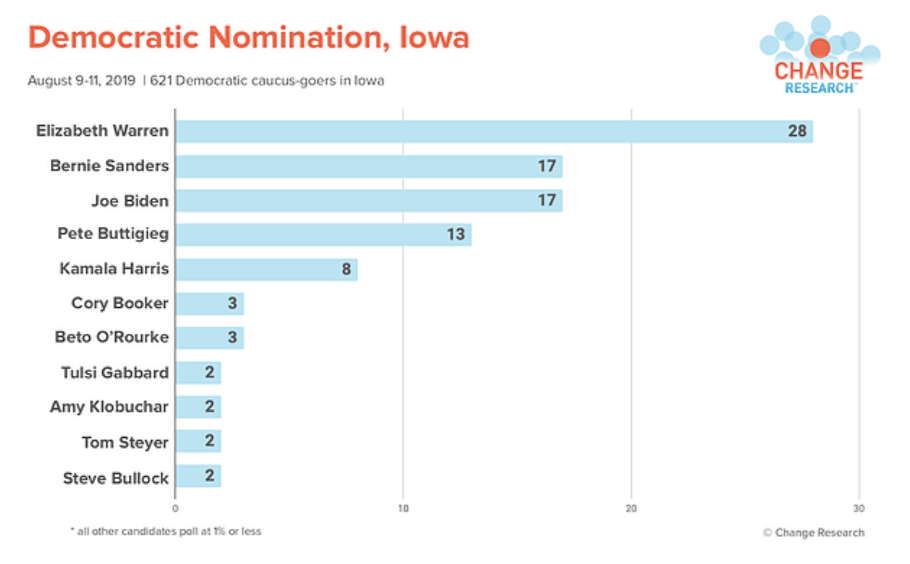 The poll was conducted online August 9 to 11, right in the middle of peak Iowa State Fair campaigning, and surveyed 621 likely Democratic caucus-goers on questions related to the Democratic horserace. That part of the poll had a ±3.9% margin of error.

Biden has come under increased scrutiny in recent weeks, thanks to his reticence to enhance the frequency of his campaign appearances, likely due to concerns over his penchant for linguistic ludicrousness and his advanced age.  This scaling back of the longtime politician’s public schedule has drawn criticism from within the democratic party itself, even garnering a retort from former Obama aide David Axelrod.

In this article:2020 election, Featured, iowa, Joe Biden, liz warren
Up Next:

Former Obama aide turns on Biden over his verbal buffoonery

EXCLUSIVE! The Stories The Mainstream Media Is Hiding
The Lid

Hidden on Page 403 of Infrastructure Law Is a Mandate for a Government Backdoor ‘Kill Switch’ for Cars
January 20th, 2022 Flag And Cross

Not The Onion: TSA Accepts Arrest Warrants As Proof Of ID For Illegal Aliens Boarding US Flights
January 22nd, 2022 Sons of Liberty Media