As Americans around the country lament the utter turmoil of the year 2020, we are witnessing weather and disaster events at a rate that would turn even the most compassionate person into a cynical mess.

Out west, the prevailing trouble has come in the form of unprecedented and terrifying wildfires, stretching from California northward into Oregon, and threatening the city of Portland itself.  This has forced authorities to issue evacuation orders that affect well over half a million Americans, and all well before the start of the traditional “fire season” out west.

As we head back to the east, however, hurricane season has begun in earnest, with a number of storms having already pummeled parts of the Gulf Coast.  This week, another major storm is taking aim at the southern United States, sending panhandle dwellers scrambling.

The U.S. National Hurricane Center (NHC) in Miami said Monday morning it remains too early to determine where the center will move onshore due to the slow movement of the storm and figuring out when it will make a northward turn.

Who would you vote for if the elections were held today?

As of 8 a.m. EDT, Tropical Storm Sally is located about 115 miles east-southeast of the mouth of Mississippi River, moving west-northwest at 8 mph with maximum sustained winds of 65 mph.

Sally will make landfall Monday night into the overnight hours as a hurricane somewhere in southeast Louisiana. A hurricane warning is in effect from Morgan City, La., to the Mississippi/Alabama border as well as Lake Pontchartrain and Lake Maurepas, including metropolitan New Orleans.

New Orleans is bracing for up to 11 feet of storm surge, with some inland areas also preparing for up to 20 inches of rain, adding to concerns about possible flooding.

In this article:Featured, hurricane, Louisiana, new orleans, weather
Up Next: 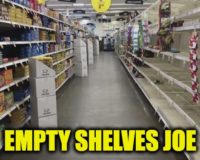 As Inflation Continues, Threat To US Food Supply Grows
November 29th, 2021 The Lid